Theo’s Pain In The Neck 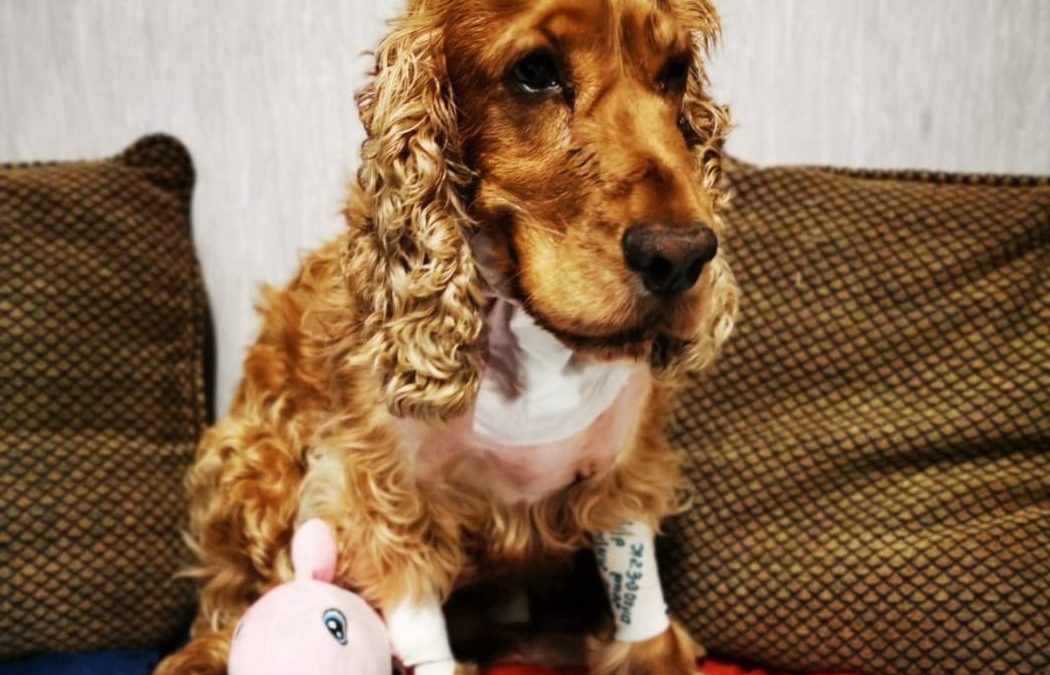 Theo was presented to Adelaide Plains Veterinary Surgery for intensive further work-up following consultation with his regular veterinarian. He had a history of severe neck/head/ear pain, which caused him to cry out intermittently. It was decided to do a CT scan as there was concern that there was a bulging disc in his neck.  If this was confirmed the intention was that Theo would stay for Dr John Katakasi to perform surgery as well. 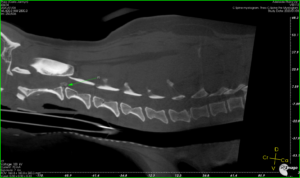 A CT scan (Computerized Tomography) gives better definition in complex joints such as the wrists, elbows and spine.  CT scanning is preferred over X-rays as it can pick up treatable problems that x-rays cannot, with more in-depth scanning. 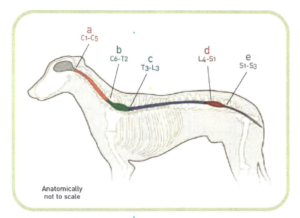 possible.  This is a very intensive procedure.  As you can imagine, anything involving the spinal cord is a very risky and advanced surgical procedure.

Once Theo was stable under anaesthesia, he was placed on a ventilator to control his breathing and anaesthetic. An incision was made on the underside of Theo’s neck with him positioned on his back.  Firstly the affected disc space was carefully identified and a small oval shaped slot of bone was removed using a very high speed burr to gradually create a tunnel to access the disc material putting pressure on the spinal cord. Dr John removed the calcification and exploded disc material, so that the spinal cord could be clearly seen sitting back in its correct position. Then small incisions, or windows, called fenestrations were made in the other disc spaces where there was calcification. The idea is that if in the future there is a minor disc bulge, then these fenestrations become a weak point so that the disc will in theory bulge away from the spinal cord, so that it does not affect the spinal column. 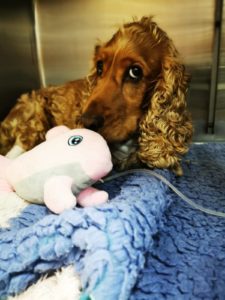 The surgery was deemed a success and Theo was then transferred to the care of the intensive care nursing team.  Theo remained on pain relief via intravenous infusion during this hospital stay to ensure he was nice and comfortable.  Post-surgery he was able to lift his head up and was not whimpering.  Nursing staff had to be very careful with him during his stay, so that his spine was always supported.  He had a super comfortable bed during his stay, to ensure he had enough cushioning.

Late in the evening (same day as surgery), Dr John came back to the clinic to check on little Theo.  Theo at this point was alert, able to stand up by himself and he walked in a few circles without seeming to be uncomfortable.

The plan during his recovery was to assist with Theo walking outside with a sling around his chest (to support the spine and the surgical area). Theo walked very well with this support.  During his hospital checks, he was bright and alert, seemed comfortable and was able to get up when given time.  His vital signs were staying within normal limits and his pain seemed to be well controlled.  He was being walked a few times per day with assistance, balanced then with cage rest.  During his post-operative care, his owners were continually updated with phone calls and we would send them photos, to let them know he was doing well.  They were also encouraged to ring us at any point to see how he was going.

By his fourth day in hospital, he was doing so well that he was able to go home.  At this point he was able to lift his head to bark and howl, showing no signs of pain.  He was even going outside and wanting to play!  He will go home and continue his medic 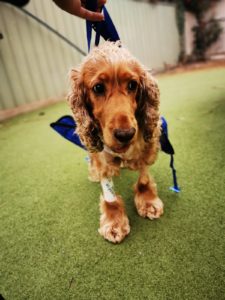 ations and his owners will be instructed to restrict his activity for the next two weeks and to try a harness on him instead of a collar and lead to keep pressure off his cervical vertebra.

Theo’s owners had their discharge appointment with Dr Emma Crabbe, with the plan to review Theo in two weeks post-surgery, but of course sooner if they are worried.  All is going well so far and Theo has his appointment booked with us for the follow up, so we will see him again then.